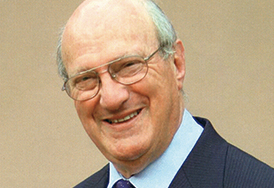 Rabbi John Levi has made a prominent contribution to Australia's Jewish community and in promoting relations between religious groups. The first Australian-born rabbi, Levi joined the staff of Melbourne's Temple Beth Israel in 1960. He became senior rabbi in 1974 and rabbi emeritus in 1998. A religious scholar, Levi has studied at The University of Melbourne, Monash University and the Hebrew Union College in the United States.

In 1985 he was invested with a Doctor of Divinity from the Hebrew Union College in Jerusalem. Monash awarded Levi an Honorary Doctor of Laws in 2006. An authority on Jewish Australian history, Levi has written five books. He was also one of the founders of Melbourne's Progressive Jewish King David School.

He has been a strong advocate for reconciliation, representing the Jewish community at the first Australian Reconciliation Convention in 1997. Levi is currently Deputy President of the Executive Council of Australian Jewry and a life member.

A pioneer of inter-religious dialogue in Australia, he is an honorary life member of the Australian Council of Christians and Jews (Victoria). Levi was honoured as a Member of the Order of Australia in 1981 for service to religion and received a Centenary Medal in 2001 for service to Australian society and the Jewish community. He was further recognized in 2021 as a Companion of the Order of Australia for eminent service to Judaism through seminal roles with religious, community and historical organisations, to the advancement of interfaith understanding, tolerance and collaboration, and to education.

Melbourne Grammar School marked its sesquicentenary in 2008. As part of the celebrations, a Talents Committed Exhibition was staged. This exhibition recognised 150 Old Melburnians who have made a difference to the City of Melbourne, the State of Victoria and the wider community in Australia and overseas. The above profile was included in the Talents Committed Exhibition in 2008.