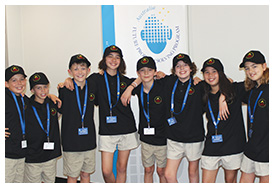 “We needed to find a problem in the community, then devise a number of solutions to solve it,” explains Eve. “The problem we focused on is that not enough people in our School community know enough about the Boon Wurrung culture and language. We wanted them to know more. We thought it would be a good year to start this because this year is the United Nation’s International Year of Indigenous Languages.”

The first step in the competition was to submit a written report. The Grimwade House team was one of four entries invited to compete in the national finals on the basis of that material.

At the final, the team staged a booth. Dressed in their clothing bearing their self-designed logo, the students were judged on their overall display, their audio-visual presentation and their performance in an hour long interview.

The booth display included posters, a scrapbook documenting the problem-solving process, and a resource kit. The resource kit was expansive, containing elements such as card

decks with translations of numbers into the Boon Wurrung language, ideas for games to play with the cards, songs for learning language, stories and language learning games.

The kits are still being created and, once complete, resource kits will be placed in each Grimwade House classroom.

The students were fortunate to work closely with Aunty Fay Stewart-Muir, an Elder and Traditional Owner of the Boon Wurrung Country, as well as a senior linguist at the Victorian Aboriginal Corporation for Languages in Melbourne. She generously gave the group permission to use Boon Wurrung words in their materials. “Aunty Fay was really informative and gave us loads of information,” says Eve. “She was a big help and I liked working with her. She was cool.”

Some of the questions in the judging interview were quite challenging, according to Miles. “We were asked ‘What legacy will you leave at your school?’,” he says. “Our response was that we hoped our resource kits would be used in classes in future years.”

“It was totally out of this world when we were announced as the winners,” exclaims Eve. “All of our hard work during the year paid off. We put in a lot of time after school, on weekends and during the holidays.”

“I feel very proud that our goal has been achieved,” says Miles. “All the members of the group contributed different parts of the project.”

“The standard of the students’ work, combined with their efforts both inside and outside of school time, has been phenomenal,” according to Ms Adrienne English, Enrichment Coordinator at Grimwade House. “They’ve demonstrated a level of maturity that is beyond their years.  Each individual was highly motivated from the start and they have largely driven this project themselves. I am so impressed with each one of them.”

The team will now compete in the Future Problem Solving International Conference in the United States next year.