Melbourne Grammar School’s senior team has won the national final of the Da Vinci Decathlon. This annual event is an Australia-wide interschool competition run in the spirit of an Olympic Decathlon, with ten events of an academic nature. The competition celebrates the world’s best known polymath, Leonardo Da Vinci, and includes tasks across a range of disciplines including mathematics, language, code-breaking, ideation, engineering, cartography, art, poetry, and drama.

Entering the competition for the first time, the team won the Victorian state final, and went on to compete in the national event held at Knox Grammar School, Sydney, over four days in early July. 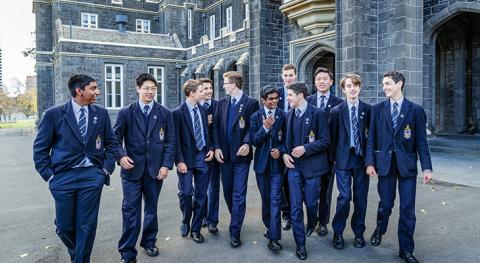 Competing against ten other seasoned teams, Melbourne Grammar placed first in the Art & Poetry and General Knowledge categories, and second in the Cartography, Code Breaking and English categories.

A further three boys were drafted in for the national final, being Anthony Chen (Year 9), Zacch Seah (Year 10) and Harlan Wright (Year 9). The boys were coached by Dr Martin Ball, Head of Extension and Enrichment at Melbourne Grammar.

“I couldn’t be prouder of our students,” said Dr Ball. “They demonstrated not only academic skill, but imagination, cooperation, and organisation.”

All articles      Next article