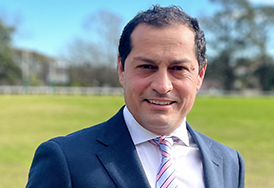 Our core mission at Melbourne Grammar School is to provide an exceptional education for young boys and girls. I believe our philanthropic success should be measured by our ability to support this goal.

I came to philanthropy through my work as a soccer coach at the University of New Mexico and, later, Harvard University. In the US, so much of what university sporting departments can achieve is underpinned by the support of donors who want to give back and encourage current and future students’ endeavours. This means philanthropy is an important aspect of the role of a coach.

My family and I moved to Australia in 2014 and, since then, I have had the opportunity to focus on professional fundraising. Some of my most exciting experiences came when raising relatively small amounts of money, as happened when I was at the University of Melbourne. We offered a program that created pathways to higher education for Indigenous students through sport, but the initial seed funding had run dry. I was able to raise the modest amount needed to secure the program for a further three years, and I’m proud to say that program is still part of the University’s work today.

I was aware of the outstanding reputation held by Melbourne Grammar School well before I moved from the tertiary sector to become Head of Development at the School. It has been a very positive move for me because there is a real understanding of the importance of making a contribution and ‘giving back’ across the School community. People are very supportive of the work that I do.

Beyond that, in my experience, people who give to education do so for a whole range of reasons—no two motivations are the same. There are those who have been supported financially themselves and see how that support led to their own success. For these people, giving is a moral obligation. For others, it’s about the affinity they still feel for a school that was formative in their lives. Then there are those donors who see the track record of an institution like Melbourne Grammar in creating the next generation of leaders, and want to be part of strengthening that legacy.

For me personally, philanthropic success is just as much about community building as financial impact. Strengthening a community like Melbourne Grammar’s can happen through big and small gifts, as well as through the gifts of time and talent that so many of our Old Melburnians provide.

Carl Junot holds qualifications in political science and sports administration gained through study at Furman University and the University of New Mexico. He is currently a Master of Business Analytics candidate at La Trobe University.

Carl’s professional experience includes Advancement roles at the University of Melbourne and La Trobe University as well as serving as an elite sporting coach at Harvard University.