The impact of LGR

The Leslie Gladstone Society has had a profound impact on many students. Here, three Old Melburnians outline how it changed their lives.

On 11 May 2018, 120 former Leslie Gladstone Robertson Society (LGR) students and staff came together to catch up and to share their recollections about their LGR experience at Melbourne Grammar School. There were tales of courage, of resilience and (just a few!) of high jinks. It was evident that everyone had strong and abiding memories of LGR.

The three stories that follow highlight the impact participation in LGR can have on a life, each unique but each with a common thread of mateship, of perseverance, and of personal pride.

Initially conceived as a voluntary bush walking club, LGR was established in 1959. While hiking and camping remains the primary focus, today, other activities include skiing, mountain biking, scuba diving and rogaining.

In addition to developing the skills of navigation and bushcraft, LGR promotes the development of constructive group dynamics. Participants are also asked to recognise and actively promote the respect, care, and maintenance of the natural and built environment

One of the unique aspects of LGR is the level of student leadership involved in each activity. LGR hikes often run for 8 -10 days. The boys set out in groups of 6 - 8 without a staff member accompanying them. Indeed, they may have limited contact with a staff member for the duration of the hike. The group leaders take direct responsibility for the health and safety of, not only themselves, but also that of others in their hike group.

Chris Rose is one of the fortunate ones. He has lived his life doing what he loves – working in nature and managing it for the enjoyment of us all. 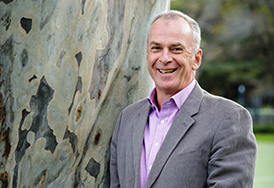 Chris “lost his heart” to nature as a Year 9 student on his first LGR experience at Melbourne Grammar. “I remember being a bit nervous at the start, but once I reached the summit of my first climb, that was it for me,” he says. “The feeling of being in the bush, together with the sense of freedom and achievement was wonderful.”
From that point on, Chris participated in “every single LGR opportunity I could”, becoming LGR Captain in Year 11. “After a while, I knew that, whatever I did in life, it was going to be in the bush; I loved it so much,” he says.

Chris has gone on to hold senior positions in parks management culminating in Chief Executive Officer of Parks Victoria, managing around 17% of the state’s land mass, plus various marine and coastal reserves.

“There seemed to be particularly great serendipity when I became Chief Ranger of the Victorian Alpine area in 1998,” reflects Chris. “I can’t recall the number of times I stood on a mountain top thinking, almost with disbelief, that I was now responsible for managing the area I loved to hike in as a boy. It was a terrific job.”

The lessons he learnt on LGR trips have held him in good stead over the years. “LGR builds many positive personal qualities, not the least being resilience and leadership skills,” he says. “As a group leader, I was responsible for the welfare of around seven other students for up to 10 days at a time. We had very little contact with teachers, so I learnt to have confidence in my decision making and to be prepared to recognise and set about rectifying any mistakes I made.”

The backpack that Andrew King borrowed for his first LGR adventure was “a piece of torture equipment” and his sleeping bag wasn’t much better. Although he didn’t know it at the time, that experience would have a major impact on his life down the track. 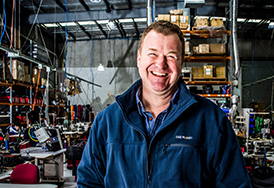 “My first LGR trip was the hardest bushwalk I have ever done. I wasn’t prepared physically, and the equipment supplied was somewhat lacking, a very thin sleeping bag and a back pack with a hip belt. It was cold and inhospitable. Yet, for all that, I loved it,” says Andrew. “I couldn’t wait to go back out again, but I knew I needed to get better gear.”

“I did quite a bit of research into camping equipment and purchased a sleeping bag, rucksack and tent,” he explains. “That research was the beginning of my career.”

Andrew was working in an outdoor equipment store after leaving school, when an unexpected opportunity arose. “People were coming into the store asking for repairs to be done to their gear. There happened to be sewing machines upstairs, so I thought I’d give it a go,” he explains. “I opened a repair business and spent hours unpicking things and putting them back together. That, together with my earlier research, led me into the manufacturing business.”

Andrew now operates One Planet – a company that manufactures high quality outdoor gear and equipment, some of which is designed especially for adolescents.
“I’m pretty conscientious about making gear that works. I don’t want to be associated with substandard equipment and I don’t want another student to have the same uncomfortable first experience as me,” he says.

One of the other major impacts that LGR has had on Andrew’s life is the lifelong friendships he formed during the hikes. “During LGR, you mix with students outside of your year level or those you might not normally connect with,” says Andrew. “I still go onto bushwalks with Old Melburnians from LGR each year.”
For more information: oneplanet.com.au

Wally Galloway was just 16 years old, when he was given the responsibility of leading three Year 11 boys and one Year 9 boy on an eight-day hiking expedition in Tasmania. They carried their house (and food) on their backs. 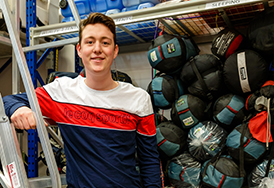 “There is a lot of preparation that goes into each LGR experience,” explains Wally. “I really enjoyed planning the trip. We knew where we intended to camp each night, and knew where water supplies were located, so the basics were taken care of.”

Of course, the unforeseen took over on occasions. “It wasn’t an easy hike by any means,” says Wally. “A few things went wrong but we just had to figure them out.”

Being an LGR Group Leader has many challenges, not the least being people management. “LGR is different to other School camps because it is voluntary. Everyone wants to be there so people are generally well spirited,” says Wally. “Nevertheless, there can be stressful points on any trip and conflicts can sometimes arise. Being a Group Leader taught me fundamental skills in dealing with people, including mentoring younger boys. I don’t think I would have had that experience otherwise.”

Since taking on his first leadership role, Wally has led numerous LGR groups and, this year, during his gap year, he is working as a leader at Melbourne Grammar camps for students in Years 6 – 9. He will head off to Japan later in the year to work as a ski instructor for three months, combining that with hiking in Nepal.

Wally will “absolutely” continue with outdoor experience throughout his life. “It’s a fundamental part of who I am now,” he says. “There is a real joy associated with being in nature for me. It is a good contrast to the structure of urban life. I find it very relaxing.”

All articles    Next article

Senior School
August 2018
In this edition
Legacy or millstone?
Honouring our fallen
Battlefields tour
All articles