It is the breadth and depth of achievement which defines the Class of 2017. Read more about their achievements and destinations.

The Class of 2017 demonstrated prowess in the classroom, on the stage, on the sporting field, at the lectern and beyond. They addressed social justice issues, and made tangible contributions to the fabric of the School and the society around them. The School is proud of their achievements and wishes them well for all future endeavours.

“Success comes in many forms. The Class of 2017 is a fine example of how a diverse group of young men can collectively have an impact across a very wide range of fields of endeavour,” says Mr Roy Kelley, Headmaster. “Of course, ATAR scores are important, but I am most proud of the inclusive and mutually supportive character demonstrated by the cohort during their final year of studies.”

“The 2017 VCE outcomes are also testament to the exceptional levels of capability and dedication demonstrated by our teachers,” says Mr Kelley.

The diversity of talent within the Class of 2017 was also reflected in the ATAR outcomes this year.

Of particular note is the extent to which the results of students who attended Grimwade House mirrored those of the overall cohort, with an upwards skew for our highest achieving students. Indeed, of our top four students, two commenced in Prep at Melbourne Grammar School, and one commenced in Year 3.

The Academic Head of School (Dux) for 2017 is Jack Solomon. Jack balanced his studies with his impressive debating success, having been tabbed (ranked) fifth best in the world during the year.

“The ATAR, looking back, forms only a small part of my school experience,” says Jack. “What has stayed with me most of all are the friendships that I forged across my 13 years at Melbourne Grammar School, the rich cross-section of ideas that I encountered in my classes, and my memories of the activities – like debating – in which I took part.”

Jack has been offered a place to study Philosophy, Politics and Economics at Oxford University.

Each year Melbourne Grammar School asks exiting Year 12 students about their experience at the School through an Independent Schools Victoria (ISV) survey. Questions relate to teaching and learning, pastoral care, resources and more. Results are compared to previous outcomes, and those of other independent schools.

In 2017, our Year 12 student responses indicated a higher level of satisfaction across all survey domains when compared to the results of other independent schools. The levels of satisfaction were also higher than the 2016 Melbourne Grammar outcomes.

As well as a high rating for ‘Overall Satisfaction’ in 2017, students expressed particularly high levels of satisfaction with:

The Class of 2017 saw 199 students successfully completing their VCE and all but three applied for tertiary study in Australia. By the end of the tertiary offer rounds, all applicants had successfully received an offer, many receiving multiple offers as more than 40 students had applied for interstate and/or overseas courses during the year.

In the first round of VTAC offers more than half (51%) of our students received offers for their first preference, and 168 (85%) received an offer in their top 3 preferences.

It has been reported that, in Victoria this year, competition for courses has increased and some course entry scores have risen accordingly. The most popular singular destination university of Melbourne Grammar School students continues to be the University of Melbourne (28%), followed by Monash University (24.5%). There has been a slight decrease in these numbers compared to previous years as many students offered places at these institutions are accepting offers to interstate, predominantly ANU, and overseas universities.

Five students have been offered entry into the Chancellor’s Scholars programme at the University of Melbourne. Two other students have received scholarship offers from Monash University, two from ANU and two from Griffith University.

It is known that 32 students were made offers to universities in New South Wales/ACT, predominantly ANU – with 26 offers, followed by UNSW (2), University
of Wollongong (2), Sydney University (1) and UTS (1). Two students are studying medicine interstate at University of Queensland and Griffith University. One student is attending the Australian Defence Force Academy (ADFA).

At the time of publication, three Melbourne Grammar School 2017 VCE students had been offered a place at Cambridge University, and one at Oxford University.

VTAC Offers by Fields of Study

The table below indicates the range of fields of study represented by the VTAC offers. It is interesting to note that there has been an increase in Creative Arts, Sciences, Health Sciences and Engineering with a slight decrease in the Management and Commerce and Architecture and Building courses for this cohort.

Michael Biggs (OM 2017) is one of eight* Melbourne Grammar School graduates who will head overseas for their undergraduate studies this year. 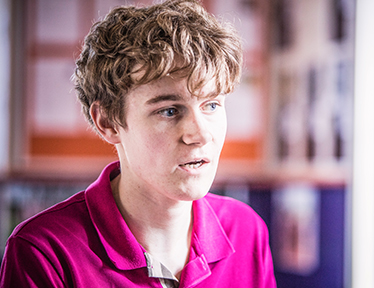 Offered a place at three top tier UK universities, Michael will study a Bachelor of Arts (Hons) majoring in History and Politics at Cambridge University.

“I was struggling to find a (local) course that met my needs in terms of majors, structure and academic standing,” says Michael. “Ms Larn, the Director of Career Development, suggested I look overseas and everything turned on its head at that point. Looking back, I am very surprised, but really pleased, about how it has all turned out.”

Michael appreciates that there will be some challenges associated with the move. “I can’t not grasp the opportunity that has presented itself,” he says. “I know there may be difficulties ahead but, at the same time, I feel ready to handle them.”

* at time of publication