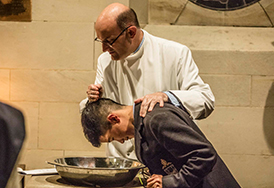 My first career was in the legal world; being a partner in a suburban practice. In my forties I decided to dabble in part-time study at a theological college. It turned out to be a life-changing decision. Before theological study, I never envisaged that I would enter the Anglican priesthood and become a chaplain and teacher. I have been fortunate to experience two fulfilling vocations.

My philosophy of teaching and learning has been influenced by my reflections upon the lexicology of the word ‘pedagogue’. Derived from a classical Greek word, paidagogos, (παιδαγωγος), it literally means ‘boy-leader’. The paidogogos was a servant in a Greek household. He had a minor teaching function (table manners and general deportment), but his true role was to safely conduct the sons of his master to and from school: a moral bodyguard who ensured they did not stray. In effect, a pedagogue was a guide to a place of learning. As the sons grew older, the paidogogos’ role diminished. He became redundant once they reached adulthood.

In his letter to the Galatians, Paul uses the term paidogogos as a metaphor for God’s law: its initial purpose, to lead us to Christ, has been superseded in light of Christ’s incarnation and salvific work.

The modern teacher’s role is also to guide their students to a place where learning happens. Teachers should not be regurgitating facts, but helping students to make their own progress on a journey. They need to be aware of issues such as cognitive development: different stages require new ways to guide. The guide needs to step back to allow children to find their own way; but be ready to provide support if required. Both teacher and student are on a journey of discovery.